Backpacking On the John Muir Trail

In August 2009 my good friend Greg Krohm and I completed a five day backpacking trip on the John Muir Trail including climbing Mt Whitney. This is a summary of our trip, written twelve years after the hike based on my recollections and documentation from the trip.

The trip was a stretch for both of us. Greg had done part of the Appalachian Trail on his own several years earlier. I had day hiked a few Colorado fourteeners and also climbed on Mt Rainier. But doing a multi-day wilderness backpacking trip at high altitude was new territory. Age added another factor. I was in my late 50s and Greg was in his early 60s. Research and planning were needed.

We selected the John Muir Trail because of its reputation as one of the best wilderness trails in the country.  The trail is 200 miles long and we had to pick a segment we could hike in five days.  The trail is in a wilderness area with restricted access. Getting a permit for this popular trail is a challenge. For a given entry date there is a tiny window to get a permit request in. We got lucky and got the day and entry point we wanted.

Equipment and clothing needed to be found and checked out. New items needed to be researched, purchased, and tested. We had to prepare for temperatures from freezing to eighty degrees. Weight is an issue when backpacking. I read several I books on light weight backpacking. We used a pyramid tent to reduce weight. I weighted everything that went into my backpack and was able to start with a backpack weight of 43 pounds including food and water.  It was still more than I wanted.

References I consulted suggested that backpackers might need nearly 3,500 calories per person per day. We planned on a little extra in case of an emergency. It was way too much. I lost my appetite hiking at over 9,000 feet. I might have used 3,500 calories per day but I could force down only about 2,000. So I lost weight while carrying extra pounds of food I couldn’t eat.

Then there are bears. This part of the trail requires bear cannisters. You can’t count on trees to hang your food since much of the trail is above the tree line. We needed two cannisters to hold the food and the cannisters weighted about two pounds each. More weight we didn’t want to carry. Plus were difficult to fit into our packs.

The preparation paid off. We got the permits we needed. Our equipment worked well. We had enough food and water.

We planned our route to start at the Onion Valley trailhead and then head south on the John Muir Trail. We wanted to get to the top of Mt Whitney and exit at the Whitney Portal. Our route map is below. 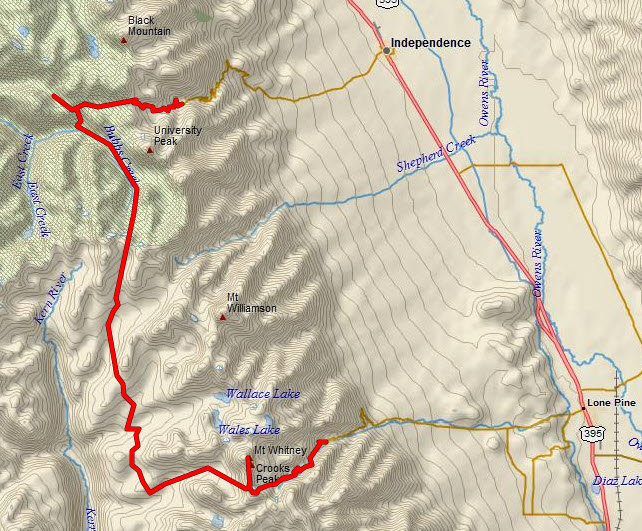 Getting There - Madison, WI to Lone Pine, California

We started with a plane flight from Madison to Los Angeles. We picked up a rental car and drove to Lone Pine, California in the Sierras near Mt. Whitney. We had to pick up stove fuel and some fresh food to eat on our first day out. We contacted the shuttle service and made arrangements for starting the next morning.

The weather for our first day was beautiful – clear skies and comfortable temperatures. Greg took a morning run and learned that Lone Pine provided the natural backdrop for many old western movies. Greg noted the motel rooms were named after famous cowboys and was charmed by the idea that his favorite boyhood stars may have stayed at our motel.

We checked in with the park ranger and got our permits. We met our shuttle driver, dropped our rental car at the Whitney Portal trailhead so it would be there for us at the end of the hike, and were driven to the Onion Valley trailhead.

We gained lots of altitude the first day. Greg and I live in the Midwest at about 800 feet. Lone Pine is at 3,700 feet. The Onion Valley trailhead is at about 9,000 ft. The trail climbs steadily 3,000 feet to Kearsarge Pass at about 12,000 feet. It was a physically tough start that left us short of breath and light headed. But the view from the pass was worth the effort.

From Kearsarge Pass it was several miles down the valley to Charlotte Lake where we camped for the evening. There was a back country ranger station there. We learned somewhere that temperature at Charlotte Lake had been near freezing the night before.  We were glad for warm clothes and sleeping bags.

(Mouse over pictures for captions.)

The second day we hiked up from Charlotte Lake retracing our steps from the 1st day for about .7 miles. There we picked up the official John Muir Trail and started heading south. Much of the day was hiking up a pretty valley heading toward Forrester Pass.

We picked a camping spot at the tree line. There was a small stream nearby for water. Everywhere was the stark and treeless beauty of the Sierras.

By now we feeling the effects of the higher altitude. One was the loss of appetite. The cumulative effect would be clear when I got on a scale after the end of our hike. We learned from a through hiker we met that weight loss is common. He had been out nearly three weeks and had lost so much his friends barely recognized him at his resupply stop.

Our third day took us over Forrester Pass at 13,181 feet. It is the highest pass on the Pacific Crest Trail. It was about a 2,000 feet climb from our campsite.

The view from Forrester Pass was spectacular. The weather was perfect. We found someone to take our picture. It is the one picture you have to have on the John Muir Trail.

The descent from Forrester pass starts out very steep. Then it is a long down hill. We hiked for about another five hours and camped. I didn’t note where our camp was exactly but it it may have been by Tyndall Creek or, more likely, Wallace Creek.

As we were making camp and getting ready for dinner we noticed a lone hiker coming down the trail. We saw very few people on the trail so we waved and said hello. We noticed immediately that something was odd — he had only a small knapsack and no obvious equipment such as a sleeping bag or tent. We motioned for him to come into camp. He did and I offered him some hot ramen noodles which he readily consumed. Then he told us the most amazing story.

The common questions asked of other hikers on the trail is where are they from, where did they start hiking, and how long had they been out. Our visitor, who spoke heavily accented English, was from the Ukraine. He was a software engineer for Microsoft.

He had started from Yosemite which is the northern starting point for the John Muir Trail. Mt Whitney is the southern end. It is 200 miles of rugged, high altitude trail between the two points. Our camp was about 10 miles from Whitney. Most through hikers take three weeks to hike the 200 miles.

When we commented that he must have been on the trail for weeks. He said “No. I started four days ago.” Our jaws dropped. He said he was running the trail.

His story explained the lack of equipment. He didn’t cook and lived on energy bars. He slept only an hour or two a day. He had GPS tracking equipment but little else. No wonder he liked our ramen noodles so much.

We mentioned our plans to get to close to Whitney the next day and summit the following day. He looked at his watch (it was about six o’clock in the evening) and said, “I plan to be on the summit of Whitney by midnight.”

He finished his ramen noodles, we wished him good luck, and he continued running.

Our goal for day 4 was to get to Guitar Lake which is a popular campsite with water and a good starting point for an early ascent of Mt. Whitney.

There were more people here because of its proximity to Mt Whitney. We met a young couple who was glad to take some of our surplus food. We also met a woman who, as I recall, every year slept on top of Whitney so she could see the sunrise.

Our last day was exhilarating but our hardest day. We planned to take a day to summit Whitney, spend a 2nd night at Guitar Lake, and then hike out the following day. Instead we did it all in one day – about 15 miles. There was roughly a 3,000 ft elevation gain from camp to the top of Whitney. Then it was down 6,000 feet to the trailhead at Whitney Portal.

We stowed our packs where the trail to the summit branches from the JMT. The lighter load was a relief. The sky was cloudless. The view from the top, the highest point in the lower 48 states, makes you feel large and small at the same time.

Reaching the summit was emotional. It had taken so much planning, hiking, and sheer physical effort to get there. We had done it. Pride and relief. Also, about ten years earlier my son, at age 16, spent the night on Whitney as part of a week long wilderness trip with his boarding school. He brought me some rocks from Whitney  which I still have. My physical and psychological connection with his experience was special. A few tears fell.

The trip down was tiring and painful on the knees. 6,000 feet is a lot of steps down. I recall being so exhausted when we reached the trailhead that Greg walked the last bit to get the car and picked me up.

We had finished our hike one day earlier than expected due to our marathon last day. We spent the night in Lone Pine. Had a long anticipated dinner and beer. The next day we drove through Death Valley on our way to LA and our flights home.

This was my first backpacking trip with Greg. We went on to do many more. I am very fortunate to have Greg as my backpacking partner. He is eternally optimistic. I have never heard him complain even when we hiked four hours in freezing rain on another trip. That is really important on a long hike. He is always up for a challenge and always carries more than his weight. Greg is extremely well read and educated and is a great conversationalist. We have the best talks on the trail. On another hike years later we were have a lunch break in the sun on a spectacular mountain meadow in Olympic National Park. We were enjoying the beauty and discussing Kant. I turned to Greg and said, “I don’t think it gets any better than this.”

Some Observations on Hiking the JMT

This was the first wilderness, high altitude hike Greg and I took. We did our due diligence and where well prepared. But we also learned much on the trail.  A few observations may be useful to others.

A Few Additional Comments by Greg

Greg shared a few additional thoughts on the trip.

You may be interested in some of my other travel blogs.