Visiting the Galapagos Island has been on our list for some time. In August, 2019 Jan and I took a Lindblad/National Geographic small boat cruise to the islands. I was apprehensive. Had the Galapagos become so popular that the wildlife was being harmed and the natural experience degraded?

Fortunately that does not seem to be the case. Ecuador is doing an excellent job at protecting the wildlife while making is available for people to experience. For example, time slots to visit the islands are strictly managed. A certified naturalist must be with you (no more than 16 people per naturalist) and in sight.

This is a summary of our trip with pictures. My usual travel diaries are organized by day. Here a different approach seemed better. The diary is structured primarily by what we saw — birds, seals, geology, etc.

Getting there and our itinerary

Getting to the Galapagos takes work. We flew from Madison, WI to Miami and stayed overnight in Miami. The next day we joined the tour group and flew to Guayaquil in Ecuador. Another overnight and then a morning flight to Espanola in Galapagos. From there we boarded our ship – The National Geographic Islander.

For the next seven days we were on the ship. The map below shows the islands we visited.

Then two days flying back home through Quito and Miami; getting out of Miami hours before a hurricane. 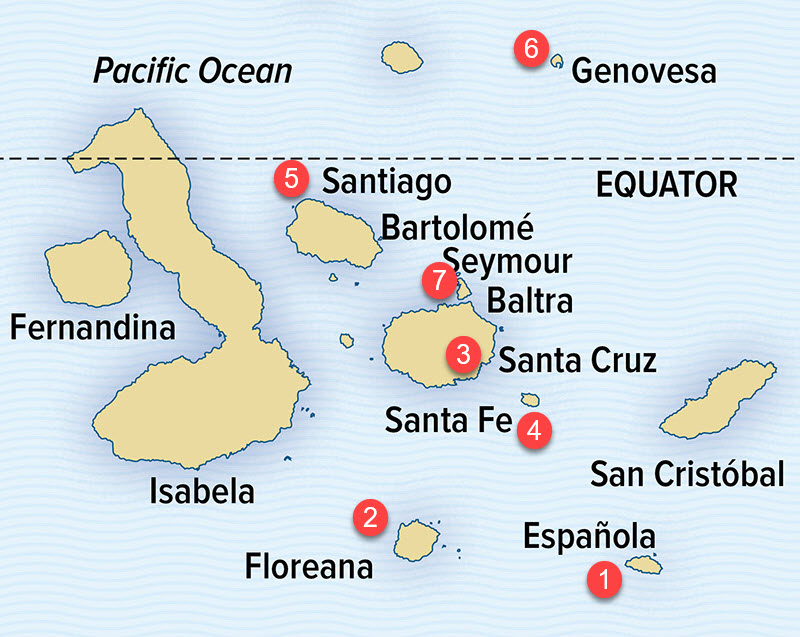 Sea Lions (there are no seals in the Galapagos)

You learn quickly from the guides that there are no seals in the Galapagos. There are only sea lions. Sea lions have ears (really small ones) and seals don’t.

There were sea lions on most of the islands. Some had lots of them. You often had to watch were you stepped. They were unafraid of humans. While snorkeling one swam inches away from me.

Sea lions are a harem species. One dominant male — the beach master — gets the females. The bachelors often live separately except for when they decide to challenge the beach master. We saw a beach master defending his harem. I wouldn’t want to get in his way.

Sea lions are great swimmers and divers. They have been recorded diving more than 900 feet. Their physiology is specially adapted to managing the pressure and oxygen problems in diving so deep. They can also climb much better than you might think. We often found them a long way from the ocean.

Here are a few pictures. Note that there is one picture of a young sea lion that had been attacked by a shark. Our guide said she expected the sea lion to recover since no vital organ or artery had been damaged. She had seen much worse. Nature is a brutal place.

Navigation note: click the arrows (or the dots below the picture) to move from one picture to the next.

There were many crabs as most of the islands we visited. Most were Sally Lightfoot crabs. There are several stories about where the name came from, most start with a woman.

Boobies are sea birds. They got their name from the Spanish slang for stupid since they were so easily caught by sailors. There are three types of boobies found on the Galapagos: Nazca, Blue-footed, and Red-footed. We saw many of each including nesting pairs.

We saw several wave albatrosses. These are large birds with an 8 foot wing span. The Galapagos is their primary nesting site.

We were fortunate to see a pair in the midst of their courtship ritual. Albatrosses mate for life. See video below.

The Galapagos Islands are a paradise for birders. There are many endemic species – birds that can be seen only in the Galapagos. The birds are not wary of humans so you can get close even when they are nesting.

There are many sea birds that nest only on islands and spend much of their lives at sea. For a mid-west birder it was a treat to see these birds I thought I would never get to see.

We saw many marine iguana on the first islands we visited. You had to be careful not to step on them. Because there were so many, it was quite smelly being around them. They are generally black and dark red to blend in with the lava along the shore.

Land iguanas live more inland.  Their colors vary as they blend in with their surroundings.  They are endangered and efforts are underway to eliminate their man introduced predators such as feral cats.

The Galapagos archipelago is part of Ecuador and located about 600 miles off the coast. It consists of 21 islands. Several islands have small cities with a total  population of about 30,000. Ecuador doesn’t allow new residents.

The islands are volcanic and experience volcanic activity. Many islands are very dry and get only a few inches of rain per year. The larger islands with high mountains (3,000 feet) can have a more tropical environment on the windward side where the mountains cause frequent rain.

Here are a few pictures of the scenery including lava flows.

The Galapagos islands are probably known best for their tortoises. These animals came close to extinction as they were taken as food by whalers and other sailors. They provided a source of fresh meet since they could survive for months on ships with little or no food.

We saw the tortoises at the Darwin Research Station on Santa Cruz island where there is a recovery effort underway to breed and raise tortoises for reintroduction.

The Ship, other Excursions, and Miscellaneous

We sailed on the National Geographic Islander. It is a small older ship carrying on 48 passengers. We liked the more intimate atmosphere. Over the week you get to know everyone, especially during meals. Unexpectedly were were upgraded from the cheapest cabin to one of the best. We had been on two previous Lindblad cruises which may have been the reason.

There were a couple shore excursions that were not entirely wildlife related. We visited a farm that was typical of what used to be on the Galapagos. We also visited the Darwin Research Station.

I took some videos during the trip. Most were of birds. These are compiled in the video below. The video is minimally edited. There is no narrative.

I would be glad to answer any questions about this trip. You can email me at robin.gates@outlook.com.

You may be interested in my other travel diaries.  See my Travel page.