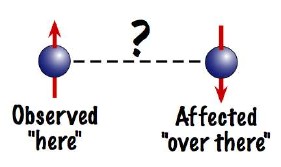 For as long as I have known about the theory of quantum mechanics I have been fascinated and awed by what is referred to as “spooky action at a distance.”  This is the phenomenon where two subatomic particles are “entangled” and a change in one particle affects the other particle instantaneously even though the particles may be light years apart. It seems foreign and impossible. Even Einstein thought this theory had to be wrong. This has been a theory but new experiments are showing empirically that it is almost certainly true. A New York Times article “Quantum Theory Experiment Said to Prove ‘Spooky’ Interactions” explains the experiment and the results. You can’t read this and not question what we consider reality.

This reminds me how much we simply don’t understand and may never understand. It is tempting to think we understand the world and how it operates. It’s nice to feel confident that we know certain things. This experiment and the theory it confirms just shows that there may be worlds and realities out there beyond our imagination and beyond the ability of our feeble intelligence to understand. It is humbling but also exciting. There are so many possibilities.